A few weeks ago I penned an article titled “The Markets Don’t Care Who Wins”. I discussed the correlation, or lack thereof, between presidents and stock market returns. As the election draws closer these discussions invariably pick up momentum, and so do the news articles. Last week I came across an article titled “Presidents don’t have much effect on the stock market” (read here) which provides additional information on this historical perspective. Listed below is a summary of the average annual growth rates for the previous five presidents and Trump. 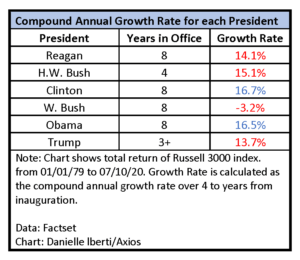 This chart illustrates the market performance under every president since Ronald Reagan, as determined by the Russell 3000 index.

As the chart above illustrates, while President Trump has been good for the stock market, he still lags behind most of his predecessors with the exception of George W. Bush, whose office suffered through the 9/11 recession and the 2008 global financial crisis.

While we normally look to the S&P 500 and the DJIA as regular benchmarks, the Russell 3000 index referenced by this chart is a much broader index. It represents the performance of the 3,000 largest U.S.-traded stocks. That covers 98% of all U.S corporations and that is why the Russell 3000 was used for the chart.

It’s important to remember that correlation is not causation, and “most” presidents sensibly try to take neither credit nor blame for the stock market performance.